British director Alexander "Sandy" Mackendrick, nerves raw from trying to shriek sense into a movie shoot that was out of control, threw up his hands and cried, "Cut!" Bing Crosby had stumbled out the front door of Manhattan's "21" Club on Fifty-second Street into the middle of a scene from Sweet Smell of Success. In the back of a nearby prop truck screen writer Clifford Odets, typewriter on his lap and a blanket thrown over his shoulders against the icy wind, glanced up at the commotion and continued punching out dialogue for the next scene.

Waiting for the next set-up, Tony Curtis paced nervously, pitching moves to Burt Lancaster, the star of the movie. "You stand still," he suggested, "and I'll circle around you." Mackendrick had told them to model this key scene on the predatory dance in Ben Johnson's Volpone: the slimy press agent Sidney Falco orbits around Lancaster's J. J. Hunsecker, the megalomaniacal, all-powerful newspaper columnist who used Falco to do his dirty work in exchange for printing the agent's gossip "items." But Curtis preferred the good old Laurel and Hardy routine: "You take the shovel, I'll take the bucket. No YOU take the shovel... " Lancaster, silent, older, stared down at him through his thick prop spectacles and said, "Do whatever you want, kid."

The camera rolled for their first take. Hunsecker walked to the edge of the sidewalk and sucked in the night air. "I love this dirty town," he barked, Lancaster's famous voice, teeth, chopping up the words into bloody bits of raw meat. The dialogue fit his Big Apple diction, so tight and sharp. And he did love this dirty town, his hometown, the Manhattan bedrock that would not yield. One of the most powerful stars in 1957 Hollywood, Lancaster sunk his big white capped teeth into the part of Hunsecker like a mastiff loose in the city, his prey dead but still twitching. "The cat's in the bag and the bag's in the river," says Falco, dancing around him, reassuring him that the plot to destroy his sister's boyfriend is in play, that she will be saved for Hunsecker's own incestuous self.

Lancaster's independent production company made this acid movie about American celebrity, ambition, greed, and lust, and then it drowned in a river of red ink and popular repugnance. "Sweet Smell of Success destroyed us all," said its director just before he died. The movie certainly killed the indie, then hung on for decades as a cult favorite and is now a Library of Congress-registered American classic.

Burt Lancaster is so much a part of the fabric of American popular culture that he blends into our collective memory like a famous uncle who was once a great athlete. Gestures and intonations remain in the mind, perhaps a bit hazy. In the final episode of Seinfeld in 1998, Kramer looks up at the sky and says, with carny zest, that there's something in the air, he can feel it. Jerry replies, "You know you're turning into Burt Lancaster"

Lancaster's achievement was uneven and he did not court acclaim -- hence the uncertain memories. From Here to Eternity or Elmer Gantry is matched by a quirky Come Back, Little Sheba or a banal Airport. But there are not many of the last. More representative of his ambition is The Swimmer. What seemed like a disjointed failure in 1968 now plays like a long-repressed American nightmare. Lancaster's more flamboyant failures were often deliberate attempts to stretch his range, to take the untutored talent he had and make it do more. "Bear with me," he once said to his audience in an interview, wryly pleading for patience while he got better at his craft.

His restlessness often gave his performances a brittle, mannered flatness. But when the work is accumulated he streaks across the screen like a quixotic American meteor aimed only at its destination. Lancaster did not make films, he made movies. The best of his work – The Killers, All My Sons, From Here to Eternity, Sweet Smell of Success, Elmer Gantry, Birdman of Alcatraz, Seven Days in May, The Swimmer, Ulzana’s Raid, Go Tell the Spartans, Atlantic City – charts the arc of postwar mainstream American life, a coherent story with chapters and themes. He lived a self-inventing life, trying on different identities like an artist shifting into different periods, assuming new personae on- and off-screen. He died in 1994 with funeral or epitaph. By then he had lost the mainstream audience even though the story he was telling was their own. They got confused along the way by the conflicting signals beaming out from his deepening persona...

Too earnest to be chic, he hungered to make what he considered grown-up movies that engaged, productively, with the circumstances of his era. As time went on, he equally resisted relaxing into a comfortable heroic cliché. “I hate looking backward,” he said in 1986, “but every once in a while it sneaks up on you. You have to fight against being an antique – an artifact of a culture’s past and not a part of its future.” As the country reinvented itself, his hero reinvented his own myth.

"Lancaster' had a fierce soul locked up in that buff body, and Buford has done full justice to it with her intelligent, discerning biography; better still, she has done justice to Lancaster's career, which becomes more intriguing the more one considers it."

“Kate Buford has done something remarkable with Burt Lancaster. She makes his childhood and circus days seem romantic and enviable. She shows him as a Hollywood giant, not always easy or nice to know. And then she brings him home as a great actor, sadder, wiser, but essential. The arc is all there--just like Burt flying through the air--but the book is as good as it is because she never denies the abiding mystery of the man.”
--David Thomson, author of A Biographical Dictionary of Film


“Outstanding. Sets a standard against which other Hollywood biographies can be measured.”
--Neal Gabler, author of Life the Movie

'Burt Lancaster had the most interesting star's career in Hollywood's most fruitful period. In Buford, he has the biographer he deserves. Categorical. Imperative.'
--Christopher Bray, The Sunday Times

'Rarely for a film actor - and even more rarely for a star - Lancaster is revealed as more complex than the sum of his parts; the result is the most interesting book about an actor since The Man Who Kept the Secrets.'
--Chris Petit, The Guardian 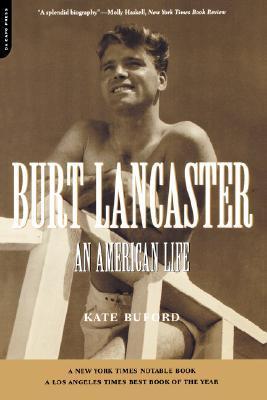