May 16-18, 2014: BIOGRAPHERS INTERNATIONAL ORGANIZATION (BIO) 5th annual conference at U. Mass. Boston. I was panel moderator for -- "Cultivating Readers and Blurb Writers" with panelists Will Swift, Abby Santamaria & Susan Rabiner -- and was a panelist on Brian Jay Jones's (Jim Henson biographer) panel -- "What Happens After You Turn In Your Manuscript."

May 10, 2014: I appeared at this terrific film noir festival in Palm Springs with Susie (Mrs. Burt) Lancaster to talk with Alan Rode about Lancaster's first film, THE KILLERS (1946).

February 28, 2014: Interview with Liz Humes of Wordy Birds, A Weekly Radio Discussion About Books and Ideas.

May & June 2013: To mark the centennial of Burt Lancaster's birth in East Harlem, NYC, on Nov. 2, 1913, I spoke on SWEET SMELL OF SUCCESS(1957) at the Film Society of Lincoln Center's Centennial Lancaster film series. On June 1 I spoke at UCLA's 3-month Lancaster Series, on BRUTE FORCE (1947) and KISS THE BLOOD OFF MY HANDS (1948). It was like a family reunion: several of the Lancaster progeny came, as well as Susie Lancaster, Burt's widow. Good times.

BBC RADIO 4: THE BALLADS OF THE GAMES
This series of six one-hour documentaries in radio ballad format, begun by Peggy Seeger in the 1950s, celebrates some of the most significant athletes (including Thorpe), moments and unforgettable sporting achievements in the history of the Olympics. Broadcast June - August 2012.

The Ballads of the Games

AUGUST 5, 2012 - DAILY BEAST article on Jim Thorpe and his legacy. 100 years ago on July 15, Thorpe won the Decathlon gold medal in the 1912 Stockholm Olympics and the King of Sweden, presenting him that day with the gold medals for the both the Classic Pentathlon and the Decathlon, called him "the most wonderful athlete in the world."

LISTEN: WHYY Philadelphia
Toronto Globe & Mail, July 19, 2012
LONDON 2012 "Memo to IOC: Just do the right thing and give Thorpe his due" JEFF BLAIR

MAY 24 - 25: SMITHSONIAN NATIONAL MUSEUM OF THE AMERICAN INDIAN, Washington, D.C. "Best in the World: Native Athletes in the Olympics" -- Opening Reception + book signing. 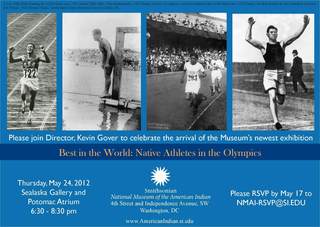 National Museum of the American Indian

**********************
MAY 18-20 2012: THIRD ANNUAL COMPLEAT BIOGRAPHER CONFERENCE (BIO)
University of Southern California. I will be appearing on the panel: Creating a Beautifully Written Biography, moderated by Will Swift, with fellow panelists Anne Heller and David Groff. I will also present the first BIO Archivist Award to Ned Comstock, of the USC Cinematic Arts Library.

May 4: CARLISLE, PA - interview with BBC Radio 4 for documentary on Thorpe to air during 2012 London Games

"Stage Set for Thorpe as Football Redefined in 1910"

-- BLOG: THE DAILY OKLAHOMAN
Jenni Carlson, "A Different View of Jim Thorpe": "... it is the photographs in a new book about Jim Thorpe that have caught my attention."

LOS ANGELES Sunday, October 24, 2010
Book signing and reception at LA84 Foundation. The largest sports archive in North America and, through its endowment set up from surplus funds from the 1984 Los Angeles Olympics, the source of programming and financial support for youth sports throughout Southern California. It was formerly the Helms Foundation and Thorpe considered it a haven in his later years, where he was fully appreciated for his contribution to American sports.

PRINT * Wednesday, July 21, 2010
Quoted in: WALL STREET JOURNAL, page 1: "Is There Life After Jim Thorpe for Jim Thorpe, Pa.? Olympic Great is Buried near Poconos, But Son Wants Him back in Oklahoma."